Statistics, its numbers and visuals as shown below, show how dangerous it is to drink and drive. Drinking and driving needless to say causes harm not only to the driver but also to others along the street, some of these accidents even resulted in death. Drunken driving is like a dagger that sometimes we stabbed into ourselves and then we cry because we are hurt. Most of these drivers know that to avoid hurting themselves and others is not to drink and drive, but still they drink and drive hoping that accident will not happen along the way, and most of these times accidents really happen. 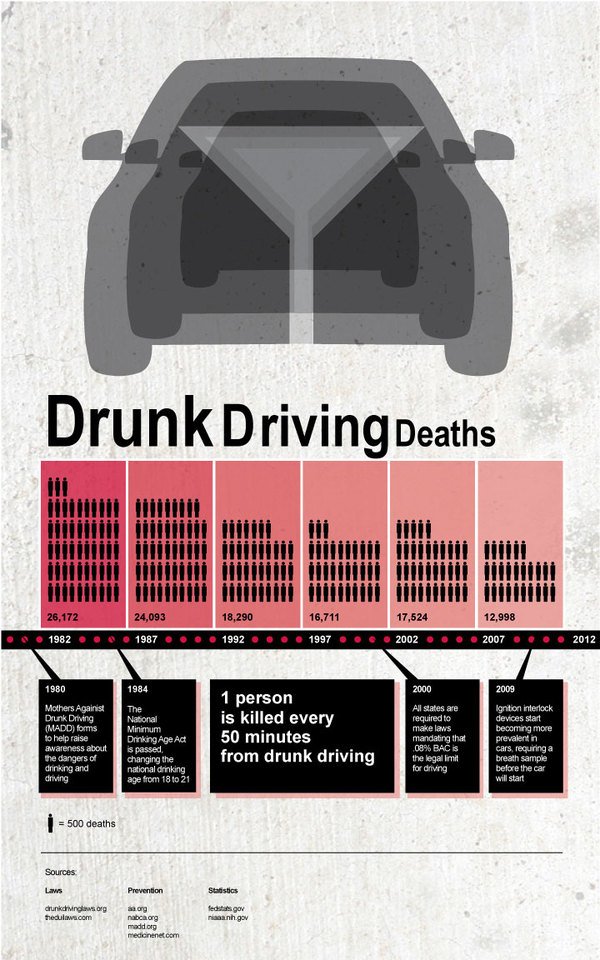 “Driving while either intoxicated or drunk is dangerous and drivers with high blood alcohol content or concentration (BAC) are at greatly increased risk of car accidents, highway injuries and vehicular deaths.”

The Dangers of Drinking and Driving

“Just because you made it home safely to your bed does not mean that you’re making a right decision. When putting those keys in the ignition and driving away after drinking you are not only putting your life at risk but you are risking the lives of all those you come across while driving. “

All of us already know that the law will not give us lollipops, if we are busted driving under the influence – we will be in jail that’s for sure. But we do not think of it while we drink and later on drive, we just think that if we can make it home without an accident then we are off the hook. And as we do it many times, the more we are convinced that we can really do it, we begin to forget that we will be penalized by law because of our violation.

“Myth: An average size man or woman can consume three, four, or even five drinks in an hour and not exceed the BAC threshold for a DWI violation.

Truth: The BAC will increase in your system for anywhere between one-half hour and three hours after you have stopped drinking, even while the level of impairment may be declining. Most women who have three or more drinks in an hour, or men who have four or more drinks in an hour will exceed the legal BAC limit for DWI for an extended period of time after they have ceased drinking. (In situations where food is being consumed during the period of drinking, the BAC will continue to elevate for up to six hours after the last drink.)” 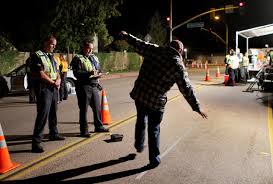 With this growing societal problem all of us might think how to solve it. We are in unison in accepting that this is really a problem; the state recognizes it, that is why there are laws in place. But beyond the deterrent which is the law we also have to think of a more subjective solution to prevent it before it happens. A solution that will change our attitude towards the problem, a solution that no matter how impossible, should be taken in order to end this problem. A solution that will start within ourselves. Driving under the influence is a problem that starts with drunken driving, a problem that can be avoided in the first place, a problem with an obvious solution: do not drink and drive. A simple solution that is hard to do.

“It is a sad reality that for some families, this season of joy will be marred by the tragedy of losing loved ones to drunken driving.”

“A drunken driver is charged in the death of Nancy Gosnell of Winston-Salem, 79, who was killed in a collision while on her way home from a Christmas play at a church Sunday night, the Journal’s Wesley Young reported earlier this week.”

“The one element we are missing is the societal and cultural side,” Bernot said in an interview Wednesday. “People still don’t seem to fully realize what a problem impaired driving is. We haven’t completely changed our attitudes, and until we can do that we are not going to stop impaired driving.”

A Lower Standard for Drunken Driving

“It is surprising how few drinks can impair a driver’s judgment. A report from the National Transportation Safety Board estimates that alcohol-impaired driving contributes to thousands of deaths and tens of thousands of serious injuries each year. It is right to urge states to reduce that toll by lowering the allowable blood-alcohol concentration for drivers from 0.08 percent to 0.05 percent.”

The sad story continues, our youngs inherit our attitude towards driving and drinking, drunken driving become a vice of a parent passed to the youth. And today this vice takes the lives of our youth, those drinking and driving and the innocent  victims.

Whenever you face a driving under the influence case, this is not a small thing, you really need to see a lawyer, your carelessness may not only give you financial problems today, but also your records might affect your future life. So if  you are arrested with Driving Under the Influence you do not know how much it will cost you (in terms of money as well as jail time) if you take it for granted. Our experienced traffic and DUI lawyers will defend you in any traffic violation case. Call 305-LAW-FIRM or contact our traffic lawyers.