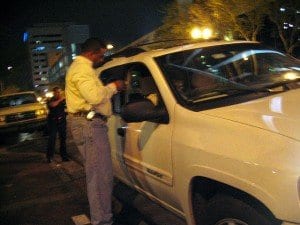 Being arrested and charged with DUI in Florida can be an intimidating experience. Once arrested there will be a possibility on DUI convictions that will result in imprisonment, penalties and fines. A lot of question might come into your mind, will I go to jail, will I get back my license? In order that the Florida DUI defense may not be so intimidating, understanding the Florida DUI law enforcement process is important. In the state of Florida DUI process involves multiple stages that follow;

Any DUI process may begin in three ways,

a.) you may be stopped by a simple traffic infractions such as speeding, failure to signal, running a red light, improper lane usage, or driving in a wrong way down in a one way street.

b.) An arrest may occur after an accident or breakdown.

c.) There are times when the police may suspect that they are dealing with a drunk driver before actual contact with the driver. A suspect may be pulled over because the officer suspects they are too impaired to drive. A suspicion may arise as a result of the manner in which you were driving (such as weaving, veering, or other actions indicative of impairment). Officers are trained on detection of drunk drivers, and these factors suggest impairment, like problem in maintaining lane, speed and braking problems, vigilance and alertness problems, and judgement problems. It can also be that the officer receives a tip from a fellow driver on the road.

But every driver pulled over by an officer may take note that pursuant to the 4th amendment of the US constitution, every citizen has the constitutional right against unreasonable searches and seizures. This means that the police cannot stop your car in order to pull you over unless they have a reasonable suspicion that you committed or where about to commit a crime.

Once stopped, if an officer suspects you to be DUI, the officer will order you to get out from the vehicle for further investigation. Field Sobriety Exercise may be administered; in Florida the exercise generally given are the HGN, the walk and turn, the one leg stand, as well as finger to nose.

Most of the field sobriety tests test the drivers coordination, balance and dexterity. All will be affected when we get drunk or the level of alcohol in the blood is high. These tests will also determine if the person can perform simple tasks simultaneously, since the effect of alcohol in the brain diminish the ability to divide the drivers attention to multiple tasks.
But there are certain conditions that the field sobriety test will hold as evidence in court; the officer must conduct the test with adequate lighting and on the level ground. Another factor that will be considered is the age and the weight of the driver, overweight individuals might find it difficult to perform the test, as well as elderly drivers.

You always have a right to refuse physical sobriety exercises, and you should. If you do decide to submit to the exercises, be sure to tell the officer about any injuries you may have or illness or prior head injuries you have suffered.

After the initial investigation officers may further request that a suspected driver may undergo Blood Alcohol Content (BAC) test, using a portable device or it could be done in the police station or a blood test. In Florida if the driver gets behind the wheel it means they give the consent to the arresting officer to conduct BAC test. You may and you should get an independent blood test anyway.

Breath testing is the most common test done by law enforcers to estimate BAC because breath analysis devices are portable and lightweight and will provide immediate results. Another test is the Blood BAC test, these kind of test needs the consent of the offender, but refusing to take blood test can have legal consequences, including suspension of driving privileges. Analysis of blood sample tends to be more accurate than the breath analyzer, but lab testing error can occur and may render inaccurate test result. The third test is an urine test. It is less accurate and can only be done, if the other two tests are not available.

Through your sobriety and BAC test results the officer may conclude that they have cause enough for you to get arrested and booked into police custody. As part of the booking process, you will be searched, fingerprinted, questioned and photographed and placed into cell. Bail will be set and you will be afforded the opportunity to place a call to speak with a friend or relative to make bail posts arrangements.

This subject is quite voluminous, I’ll continue in my next post. Below are some related readings, if you like to go deeper into this topic of DUI defense in Florida. Call your trusted DUI defense lawyer at 305-LAW-FIRM.