Toll Collection Enforcement Getting Even Tougher 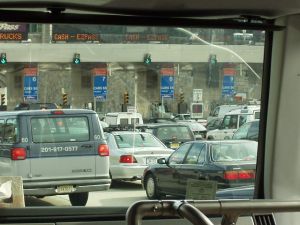 As a temporary, “cashless” toll gantry is due to be installed on the current Tappan Zee Bridge in 2015, state lawmakers and transportation officials are looking into ways to ensure they can enforce toll collection on the new replacement bridge scheduled to have an all-electronic tolling (AET) configuration by 2018.

According to an April 21 editorial in The (White Plains, NY) Journal News, “As plans move apace to introduce [AET on the Tappan Zee Bridge], the stakes get higher. Tollpayers are going to be responsible for much of the new Tappan Zee’s $3.9 billion price tag; soaring rates of toll scofflaws would further burden those who can already expect to see tolls jump in coming years. Electronic tolls make it easier to avoid payment; higher tolls feed motivation. The state needs to make it sting for drivers who ignore those toll collection notices in the mail.”

The newspaper’s editors point out the high cost of toll payment defaults and say recent experience suggests that “the state needs to update the way it deals with toll scofflaws before it expands a toll collection system that invites evasion.”

There is a new toll management service for fleets, but what about the average driver? I know, its hard, but we are prepared to assist you with our specialized traffic ticket lawyers in any case of toll notifications. Call us at 305-LAW-Firm or use our contact us form.

With the intro­duc­tion of TollPlan, an elec­tronic toll pay­ment solu­tion, Lease­Plan clients can save up to 50 per­cent on toll man­age­ment admin­is­tra­tion costs.

Vio­la­tion­s­Plan reduces the risk of penal­ties and offers sav­ings on aver­age of 60–70 per­cent over most fleets’ cur­rent processes. In addi­tion, the pro­gram holds dri­vers account­able for their fleet vio­la­tions and asso­ci­ated fines. Lease­Plan clients can also improve fleet safety with detailed report­ing that helps gain vis­i­bil­ity into a fleet’s vio­la­tion activ­ity and dri­ving behavior. Credits: LeasePlan Launches Toll and Violations Solutions | Automotive Digest

Those outstanding fines could add up quickly, as the Expressway is increasing toll violation penalties (formerly known as administration fees) from $25 to $50. Additionally, Expressway employees can be seen on occasion .. Credits: AC Expressway Cracks Down On Toll Cheats [AUDIO]

SUISUN CITY (CBS13) — A Suisun City man receives $17,000 plus in toll violations in Southern California.
But he says not one belongs to him.
After a four year battle, it was time to call Kurtis.
A four year long battle trying to convince the toll authorities it wasn’t him.
Turns out, it was a DMV mistake.  But in four years, the DMV didn’t seem interested in helping him clear this up.

“Surprise, shock, I don’t live in Southern California,” said Myron Martin, Suisun City resident.
Yet Myron has received more than $13,000 in toll violations from The Toll Roads in Orange County and about $4,000 from the Orange County Toll Authority in the past four years, all stemming from a DMV mistake.

A year after he bought his truck in 2008, he realized his license plate didn’t match the one listed on his registration.
The DMV got him new plates but the violations from Southern California kept coming. And he says they refused to help him get these violations dropped. Some are now in collections.
“You go to DMV, you raise this red flag with them, you’d think they’d fix it right away. Uh uh, year after year after year, we can’t do anything about it Mr. Martin,” said Myron.

“It’s really outrageous for the DMV to let this go on for years,” said Rosemary Shahan, President, Consumers for Auto Reliability and Safety.
Shahan says Myron shouldn’t have to jump through hoops to fix the DMV’s mistake.
“That’s their responsibility, they’re the ones that made the mistake,” said Shahan.

Myron received this letter from the DMV, clarifying the plates were not his but he couldn’t figure out where to send it.
Our volunteer Dan took the case and we got that letter into the right hands at the toll companies. “After that time, the toll company removed the charges from his account,” said Dan.

So why didn’t the DMV help fix this years ago?
They’d only say “… sometimes mistakes happen due to human error. This customer’s issue has been resolved and the DMV apologizes for any inconvenience.”
– Jan Mendoza, spokesperson

Myron no longer on the hook for whoever racked up these violations!

“He hasn’t had to pay his registration now for four years. And he’s probably dancing in the tulips, right?” asked Myron.
He says the person is driving the same make and model but different color.  His truck is blue, theirs is white.
The Orange County Transportation Authority didn’t want to comment.
The other company, The Toll Roads, tells us they stopped mailing violations to Myron in the fall when he contacted them.
Credits: Call Kurtis: $17,000-Plus In Toll Violations And They’re Not Mine …

What about a new scam? Of course we have one, found first at the end of last month:

The people behind the scam are going by the name Toll Enforcement LLC, a non-existent Florida company. The Turnpike has posted a “fraud alert” on its SunPass website, verifying to users how “toll-by-plate invoices” and “toll violation” notices actually … Credits: Fake toll notices seeking money being sent to Fla. drivers – WESH Orlando

Toll agencies running facilities from the Golden Gate Bridge to the Florida Turnpike in Miami are adopting “all-electronic tolling,” which eliminates toll booths altogether. Drivers either pay with an electronic device, or the agency bills them using … Credits: Didn’t Pay A Toll? Enforcers Might Track You Across State Lines – Stateline